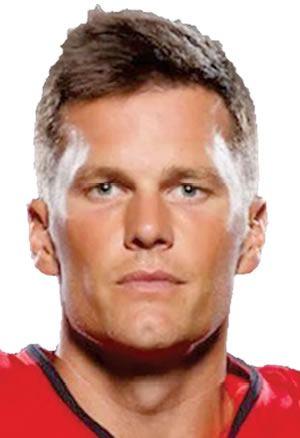 During the NFL’s 2020 season, Brady threw 610 regular season passes and completed 401 of them. In the playoffs, Brady threw another 138, completing 81. His most memorable pass, though, came three days after the Bucs won Super Bowl LV on their home field of Raymond James Stadium. It came during the team’s celebratory boat parade on the Hillsborough River when Brady, holding the NFL’s iconic Vince Lombardi Trophy, decided to toss it across 20 feet of river water to a teammate celebrating on a different boat. Fortunately for Brady — and the priceless trophy — Cameron Brate, a Bucs tight end, made the catch.

The hair-raising heave was a departure for the almost-always composed Brady, who has now quarterbacked teams to seven Super Bowl titles, including six with the New England Patriots. At age 43 — and having just signed a new two-year contract worth $50 million with the Bucs — Brady is generally considered the best quarterback in football history. Apart from winning five Super Bowl MVP awards, he’s the NFL’s all-time leader in passing yards, completions, touchdown passes and games started. He also leads quarterbacks with 14 Pro Bowl selections.

While football is a team game, with one player among a roster of nearly 50 rarely able to win or lose a game alone, Brady has a knack for willing his teams to win. The year before he joined Tampa Bay and won the Super Bowl with a combined regular season and playoff record of 15-5, the Bucs were 7-9 and didn’t even make the playoffs.

Off the field, he’s married to model Gisele Bündchen. They have two children. During the football season, he rented the Davis Islands mansion owned by Derek Jeter, who moved from the house in Tampa to Miami after becoming CEO and part-owner of the Miami Marlins. Brady, who owns TB12, a sports performance and nutrition company, announced plans to launch a NFT (non-fungible token) platform called Autograph later this year.