Welcome to the third edition of the Florida 500, a special publication that highlights the 500 most influential executives in different economic sectors throughout the state. This immense, year-long research initiative by the editors of Florida Trend has resulted in a personal, engaging look at the state’s most influential business leaders.

Readers of the 2020 edition of the Florida 500 will notice some changes in the publication’s appearance. Along with some new faces, we’ve expanded the write-ups of several influentials in each category. There’s no hierarchy at work — we’re not suggesting that those who got a little more ink are somehow more influential than others.
Rather, we chose to highlight people who: 1. We find particularly interesting; 2. Have a wide sphere of activity; and 3. Embody the growing diversity of Florida’s business community at a time when it seems appropriate to highlight that diversity and celebrate it. Otherwise, our general methodology for the Florida 500 remains the same:
We organize our selections using broad economic categories from the U.S. Department of Commerce, with the number of influentials in each category roughly proportional to that category’s share of Florida’s state GDP. We don’t include current elected officials in the mix. We don’t include more than three people from any single firm.
Nobody makes the list just because he or she runs a big company. Longevity matters, and visibility doesn’t necessarily mean influence. We acknowledge that the final picks are necessarily subjective. We put people on the list who don’t want to be there, and we leave some off who’d definitely like to be there. Advertising plays no role.
Exemplifying Influence
Publisher’s Letter
Advice from a Reader
Editor’s Letter

The 2020 Florida 500 print edition is now available The editorial staff of Florida Trend recognizes Florida’s most influential business leaders spanning across more than 60 business categories.  The editorial selection of the 500 executives was based on extensive contacts in regional business circles, hundreds of interviews and months of research, culminating in a highly selective biographical guide to the people who really run Florida. 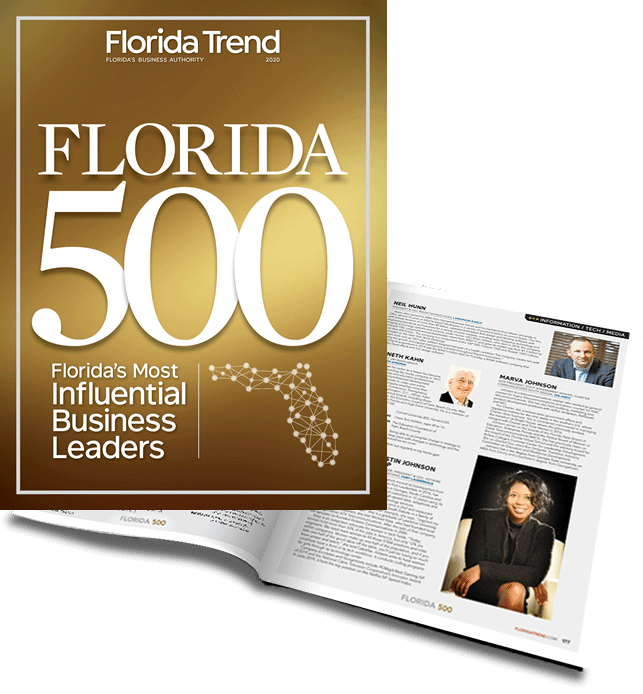 Fill out my online form.

We are currently accepting recommendations for the 2021 Florida 500 issue.

To share an influential business leader recommendation with the editorial staff of Florida Trend – please compete and submit the information below.

All recommendations will be viewed and considered, but final selection will be made by Florida Trend’s executive editorial team.

The 500 executives are selected based on extensive contacts in regional business circles, multiple interviews, months of research, culminating in a highly selective biographical guide to the people who really run Florida.

Now, in its third year, the Florida 500 is the product of year-long research initiative by the editors of Florida Trend resulting in a personal, engaging look at the state’s most influential business leaders across major industries.