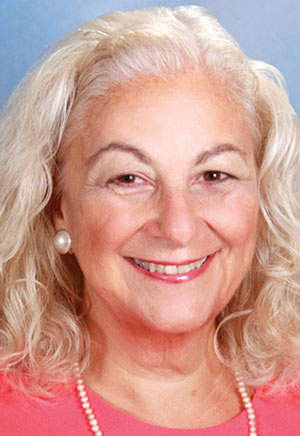 After graduating from college, Doppelt went to work for a Madison Avenue advertising agency but discovered it wasn’t as glamorous as it seemed. She went back to school, earned her law degree and landed a job at the Reader’s Digest Association (the parent company of Reader’s Digest), where she found her niche in intellectual property.

She is one of Florida’s leading IP lawyers, managing trademark and copyright portfolios and advising clients on trademark, publishing, entertainment, licensing, franchising and copyright matters. She’s also an accomplished litigator in federal and state courts, as well as administrative agencies. She has been a shareholder at Allen, Dyer, Doppelt + Gilchrist since the mid-1980s. The firm has offices in Orlando, Miami and Winter Springs, as well as a satellite office in Jacksonville.

Doppelt, who grew up in Pittsburgh, where her father ran a professional arts organization, is past president of the board of the Orlando Ballet and also serves on the board of the Association to Preserve the Eatonville Community. The group holds an annual festival of arts celebrating the life of writer and folklorist Zora Neale Hurston, who resided in the Orange County neighborhood known for being the oldest incorporated African-American municipality in the nation.

Doppelt is secretary of Florida Lawyers Mutual Insurance, which provides professional liability coverage to Florida lawyers. She’s also a member of the Florida Association for Women Lawyers and serves as a mentor in mentorship programs for the Central Florida Association for Women Lawyers, the American Inns of Court and the Orange County Bar Association. She is a frequent speaker on intellectual property, publishing and entertainment law and co-authored a chapter on trademarks, service marks and other related intellectual property rights in Florida franchise law and practice. She also served as an adjunct professor at Barry University law school and is an arbitrator for the American Arbitration Association. She graduated Phi Beta Kappa from Northwestern and earned her law degree from New York University.

“When I moved to Orlando from New York City in 1983, I could not have imagined becoming a longtime member of the Orlando legal community and the Florida intellectual property community.”