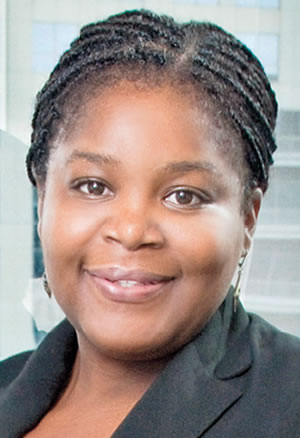 Jackson grew up in the east Mims housing projects near Titusville. In high school, she played basketball and won state titles in the shot put and discus. A high school American government teacher recruited her for a mock trial team, inspiring her ambition to become an attorney. By the time she enrolled at UF, she had earned 13 academic scholarships that paid the bills for her freshman and sophomore years. She competed in track at UF but without an athletic scholarship. She earned both her undergraduate and law degrees at UF. At Rumberger, Kirk, she practices in the areas of casualty and product liability, defending companies against premises liability, product defect and motor vehicle accident liability claims involving personal injury, wrongful death and property damage cases. She also represents public entities such as housing authorities and various governmental agencies and municipalities in civil rights and public records cases. She served as a member of the Florida Bar’s Young Lawyers Division Board of Governors from 2009-2014 and was chair of the Young Lawyers’ Continuing Legal Education Committee. She is past president of the Virgil Hawkins Florida Chapter National Bar Association and was elected as the first Black president of the Orange County Bar Association in June 2020.