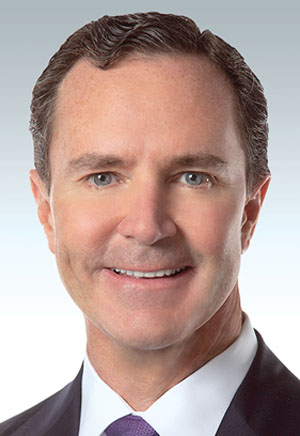 Harris’ merger with L3Harris Technologies created a global defense technology company with about $18 billion in annual revenue. L3Harris — Brown kept the company’s headquarters in Melbourne — is the sixth-largest U.S. defense contractor, the largest aerospace and defense company based in Florida, and the eighth-largest company in the state. Brown, CEO since 2011, has led the company away from a diversification strategy to focus primarily on building high-tech equipment for governments. The company recently launched a satellite that it designed and built, positioning itself in the growing “smallsat” market as the federal government moves away from a network of large, multi-system satellites to an array of smaller, single-purpose craft.

Brown, with an MBA from the University of Pennsylvania and bachelor’s and master’s degrees from Villanova University, advises executives to “seek out and accept stretch assignments to broaden your skill set. Don’t settle for mediocrity or shy away from challenges. An individual who has moved around a company learns how to be an entrepreneur — taking risks and trying new things. Next, pay it forward. Great leaders differentiate themselves by developing and fostering future generations of leaders.”