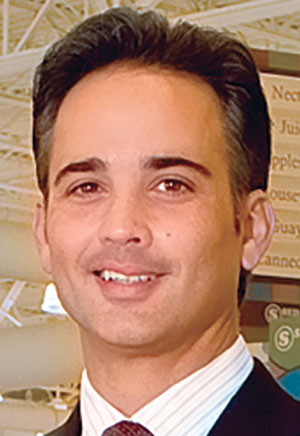 Starting with a single Hialeah store in 1962 to serve the area’s influx of Cuban immigrants, the Guerra and Herrán families built Sedano’s Supermarkets into America’s largest independently owned Hispanic supermarket chain, which now has 35 stores and more than 3,000 employees in Southeast Florida and Orange and Osceola counties. The stores cater to a range of Hispanic tastes with specialized goods and low-priced staples.

Herrán is part of his family’s second generation to lead Sedano’s, one of the largest Hispanic-owned retailers in the nation. In 2020, he lost his father, Manuel Herrán; the founder and former chairman of Sedano’s passed away in October.

In 2020, Sedano’s was named to Food & Wine’s list of The 20 Best Regional Supermarket Chains of All Time. Herrán has embraced new technologies to ensure his company’s continued growth. In 2019, Sedano’s made headlines for being an early adopter of robotic technology in an effort to process online orders quickly and efficiently. It partnered with Takeoff Technologies to launch “the first robotic supermarket in the nation,” where customers’ online orders receive immediate fulfillment by an automated system (with support from Sedano’s employees).