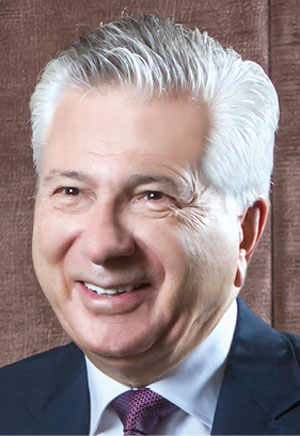 When Abu-Ghazaleh took over Fresh Del Monte in 1996, the company had limited product offerings and was burdened with millions in debt, according to CEO magazine. But he’s led a renaissance at the company, which produces, markets and distributes fresh and fresh-cut fruit and vegetables, prepared fruit and vegetables, beverages and snacks throughout the world.

There were, of course, some pandemic-related challenges in the foodservice market in 2020, which impacted the company’s bottom line. Net sales for 2020 were $4.2 billion, down from $4.5 billion in 2019. But 2020 highlights included the opening of a state-of-the-art Mann Packing facility in California that merged four facilities into one, as well as a new cutting-edge distribution and fresh-cut facility in Japan.

Abu-Ghazaleh — whose father was a fruit importer in the Middle East in the 1950s — studied business administration at the American University in Cairo and was president and CEO of United Trading from 1986 until he bought Fresh Del Monte. He took the company public in 1997.

Abu-Ghazaleh also serves as chairman of the Royal Jordanian Air Academy, International General Insurance, Arab Wings and Queen Noor Civil Aviation Technical College. He is chairman of the $290-million Abdali Clemenceau Hospital project in Amman and a member of a council that advises King Abdullah II of Jordan on economic and social issues.